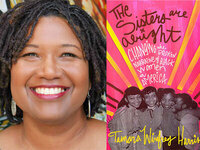 News headlines, social media and talking heads paint a problematic picture of black womanood. In The Sisters Are Alright: Changing the Broken Narrative of Black Women in America, Tamara Winfrey-Harris  points out the warped prejudices behind that narrative and replaces them with the complex, hopeful reality of what it's actually like to be a black woman in America. She explores the impact of stereotypes on black somen's experiences with marriage, motherhood, health, sexuality and beauty.

Tamara Winfrey-Harris' work has appeared in the Chicago Sun-Times, In These Times, Ms. magazine, and a variety of online publications.