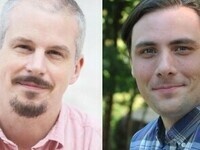 Canadian-American poet James Arthur is the author of The Suicide’s Son (Véhicule Press, 2019) and Charms Against Lightning (Copper Canyon Press, 2012). His poems have also appeared in The New Yorker, Poetry, The New York Review of Books, The American Poetry Review, The New Republic, and the London Review of Books. He has received the Amy Lowell Travelling Poetry Scholarship, a Hodder Fellowship, a Stegner Fellowship, a Discovery/The Nation Prize, a Fulbright Scholarship to Northern Ireland, and a Visiting Fellowship at Exeter College, Oxford. Arthur lives in Baltimore, where he teaches in the Writing Seminars at Johns Hopkins University.

George David Clark’s Reveille (Arkansas, 2015) won the Miller Williams Prize and his recent poems can be found in AGNI, The Georgia Review, The Gettysburg Review, Ecotone, The Southern Review, and elsewhere. The editor of 32 Poems, he teaches creative writing at Washington and Jefferson College and lives in western Pennsylvania with his wife and their four young children.