An Evening With Ron Capps and Tom Glenn 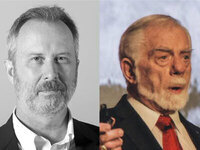 Ron Capps is the author of Seriously Not All Right: Five Wars in Ten Years (Schaffner, 2014), a memoir of his service as a soldier and Foreign Service officer in Rwanda, Kosovo, Afghanistan, Iraq, and Darfur. Seriously Not All Right is a memoir that provides a unique perspective of a professional military officer and diplomat who suffered (and continues to suffer) from PTSD. His story, and that of his recovery and his newfound role as founder and teacher of the Veterans Writing Project, is an inspiration and a sobering reminder of the cost of all wars, particularly those that appeared in the media and to the general public as merely sidelines in the unfolding drama of world events.

Capps is the founder and director of the Veterans Writing Project, a non-profit that provides no-cost writing seminars and workshops for veterans and their family members. He is the curriculum developer and lead instructor for the National Endowment for the Arts programs that bring expressive and creative writing seminars to wounded warriors at the National Intrepid Center of Excellence. He is a graduate of both the Master of Liberal Arts program and the MA in Writing program of the Johns Hopkins University and did further graduate work at the School of Oriental and African Studies at the University of London.

In Tom Glenn's new novel, The Trion Syndrome, German professor Dave Bell is haunted by a half-remembered clandestine mission in Vietnam and the myth of Trion, the Greek demigod. Dave discovers an unpublished novella by Thomas Mann based on the Trion myth and believes he sees himself. Friendless, Dave is betrayed by his colleagues and accused of sexual harassment. He loses his job, his wife divorces him, and his children refuse to see him. At his lowest point, his suppressed memory of what happened in Vietnam resurfaces.

Tom Glenn has worked as an intelligence operative, a musician, a linguist, a cryptologist and a government executive. He is a reviewer for The Washington Independent Review of Books and the author of two previous novels, Friendly Casualties and No-Accounts.