Writers LIVE: Scott Shane, Objective Troy: A Terrorist, a President, and the Rise of the Drone 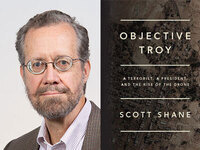 Objective Troy tells the story of Anwar al-Awlaki, the once-celebrated American imam who called for moderation after 9/11, a man who ultimately directed his outsized talents to the mass murder of his fellow citizens. It follows Barack Obama's campaign against the excesses of the Bush counterterrorism programs and his eventual embrace of the targeted killing of suspected militants. And it recounts how the president directed the mammoth machinery of spy agencies to hunt Awlaki down in a frantic, multi-million dollar pursuit that would end with the death of Awlaki by a bizarre, robotic technology that is changing warfare -- the drone.